Oracle indicated that jQuery would be included as part of Oracle Apex 4.0 last year at OpenWorld, and this is stated in the current roadmap.

The question is whether Oracle were planning to use jQuery UI or not still remained unanswered.
The recent Apex 4.0 video and powerpoint by Mike Hichwa and David Peake has a slide at the beginning making me think that they would be including the jQuery UI.

Today Tyler Muth confirmed that jQuery UI is definitely included as discussed in detail in this forum post.

So, does this leave ExtJS out in the cold?
Well not really, as I indicated earlier in the same forum post, because ExtJS has a plugable adaptor framework which can use jQuery as a base layer.
This allows you to use jQuery for the non-visual aspects and ExtJS on top of it, allowing you to use the best features of both.

The other rumour I heard, is a beta of Oracle Apex 4.0 is very close to going live, but that’s unconfirmed.

LOL - and just when I thought I'd get away with being lazy... 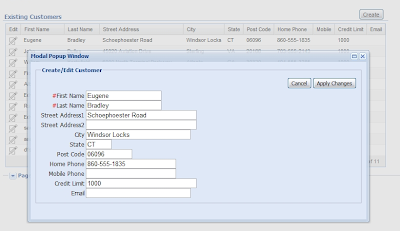 A number of people have been posting about modal windows on the Oracle Apex forum of late.

Some of the solutions provided have used jQuery UI, or using window.showModalDialog.

I’m not a fan of window.showModalDialog as a quick Google search shows it is not supported by all browsers.
The jQuery UI version is functional, but the visual appearance doesn’t live up to the ExtJS standards in my opinion.

Anyway have a look at the Modal Popup Window example and see what you think.
To call the popup window I simply add the highlighted onClick text to my edit link as shown below.

You’d have to agree it doesn’t get much simpler than that.
Posted by Mark Lancaster at 10:55 PM 19 comments: